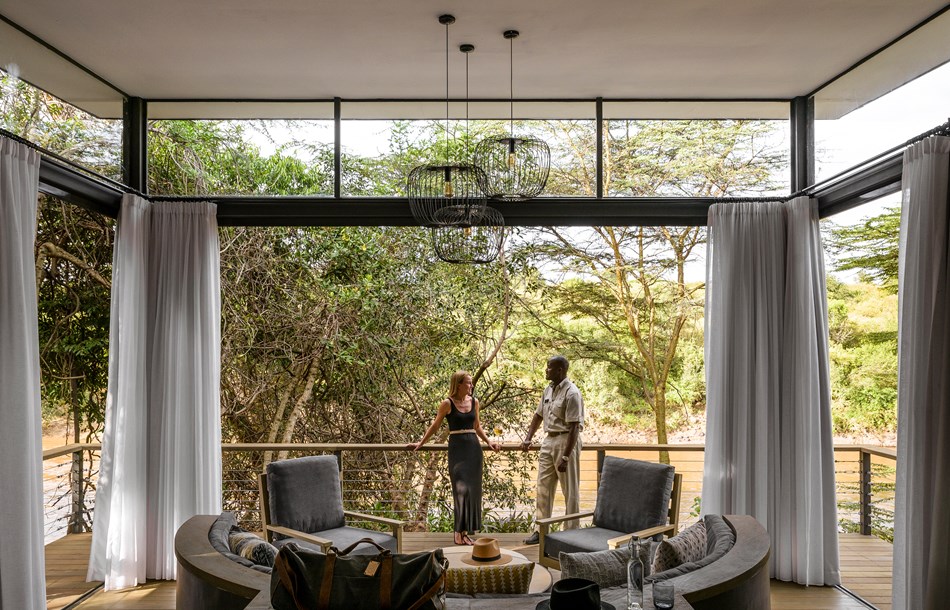 Follow us to East Africa where we met up with our camp managers and assistant managers. Their knowledge and passion are what make each stay with us an unforgettable experience. From how they developed a passion for the travel industry to their favourite parts of Africa, find out everything there is to know about them. 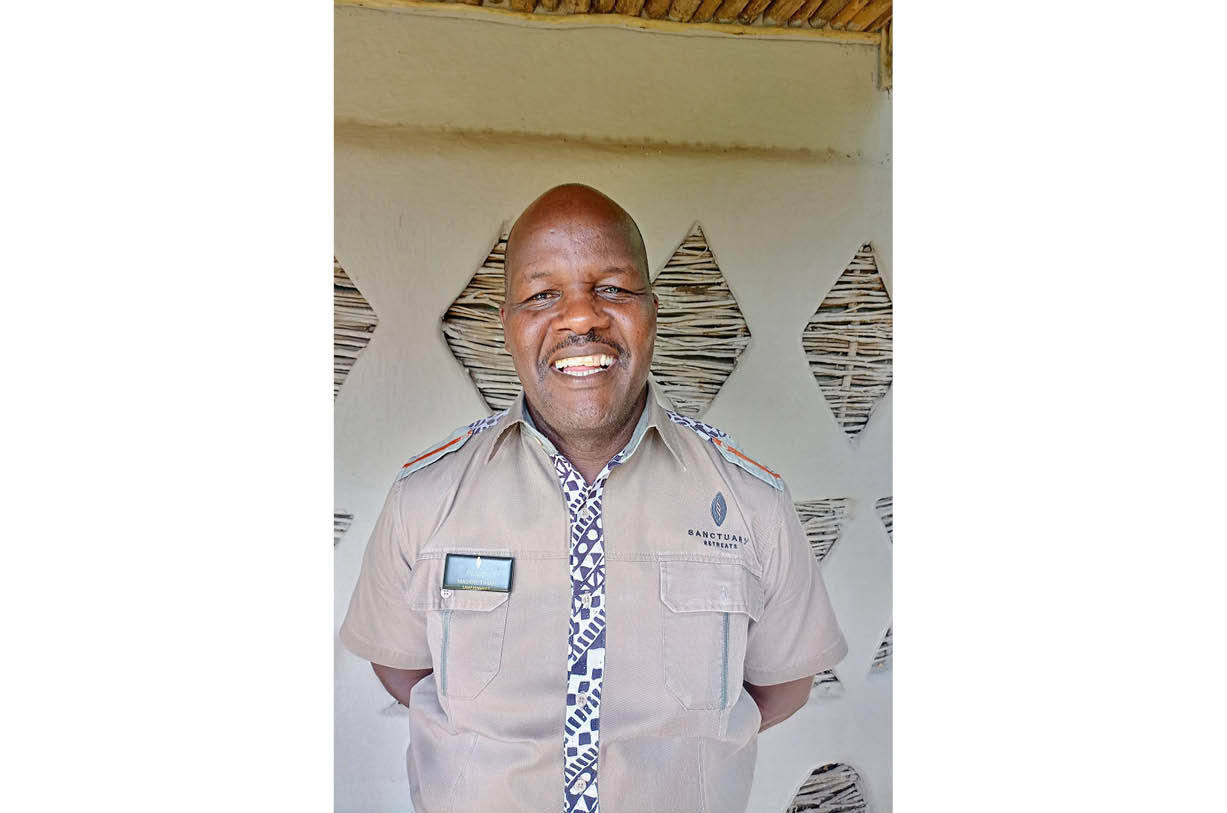 Growing up in Western Kenya, the travel and hospitality industry has long been a childhood aspiration for Maurice. When an opportunity arose to study it at college, he quickly jumped on it and the rest is history. Maurice holds an unmatched record of 24 years of dedication and service to Sanctuary Retreats, and Sanctuary Olonana in particular. Having been at the camp since its inception in 1999, no one knows its walls as well as him – a place he cherishes and calls his second home. From the original 12-tented camp it used to be to the fully renovated luxury suites you experience today, Maurice can take you on a journey through time telling you the ins and outs of the camp and the Masai Mara that surrounds it. While his knowledge of the land renders him vital to the team, it is his passion and leadership that ensure the camp’s ongoing strive for perfection. As he put it to his team: ‘The past is in your head, but the future is what you are holding in your hands’. 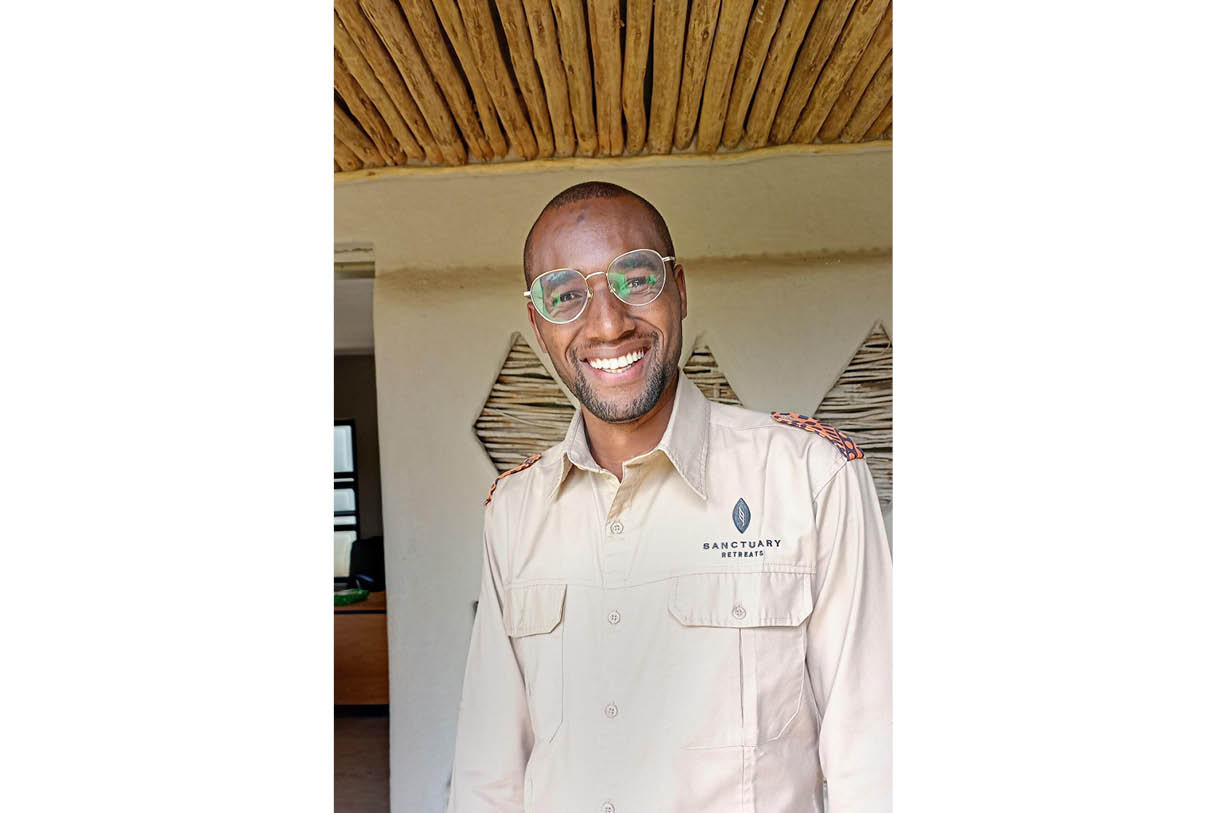 Born and raised in the Laikipia Plateau, John developed an early connection with the region’s vibrant wildlife. Following his graduation from the University of Eldoret, John set off on a path in the Tourism industry before landing at Sanctuary Retreats in 2022. Don’t be fooled by his recent start at Sanctuary Olonana, John’s years of experience and energetic personality quickly made him a key member of the Olonana family. Listen to him talk about camp's 24 years of history, let him advise you on the best activities to do during your time there, and of course, let John recount his stories growing up on the Laikipia Plateau. Aligned with Maurice as GM, they are the perfect duo to deliver the best guest experience at Sanctuary Retreat’s oldest camp. 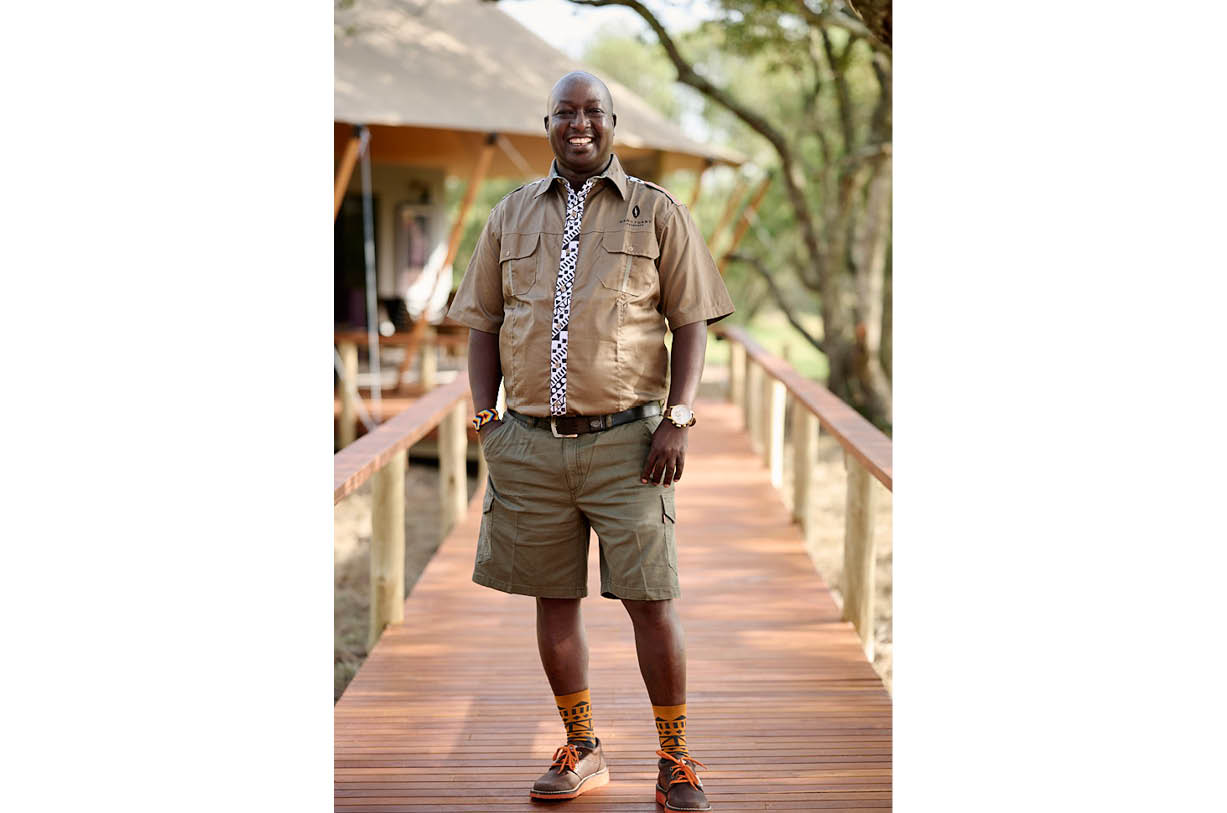 Jackson was born and raised in Narok County, Kenya, where he is married to Vivian and blessed with four beautiful children. He was inspired to go to culinary school by his cousin to become a chef and through his training ended up working in the bush. Through 16 years at Sanctuary, Jackson rose from Sous-Chef to Sanctuary Tambarare’s new Camp Manager since its opening in June 2022.

His dedication to the region and camp has seen him develop a soft spot for it, calling it his ‘second home’. This love for the bush can be felt in each conversation with Jackson. When he is talking about the secrets of Ol Pejeta’s plains, from wildlife sightings at breakfast from your tent to meeting the last two Northern White Rhinos (his favourite activity), Jackson keeps each guest excited about what they are yet to experience. 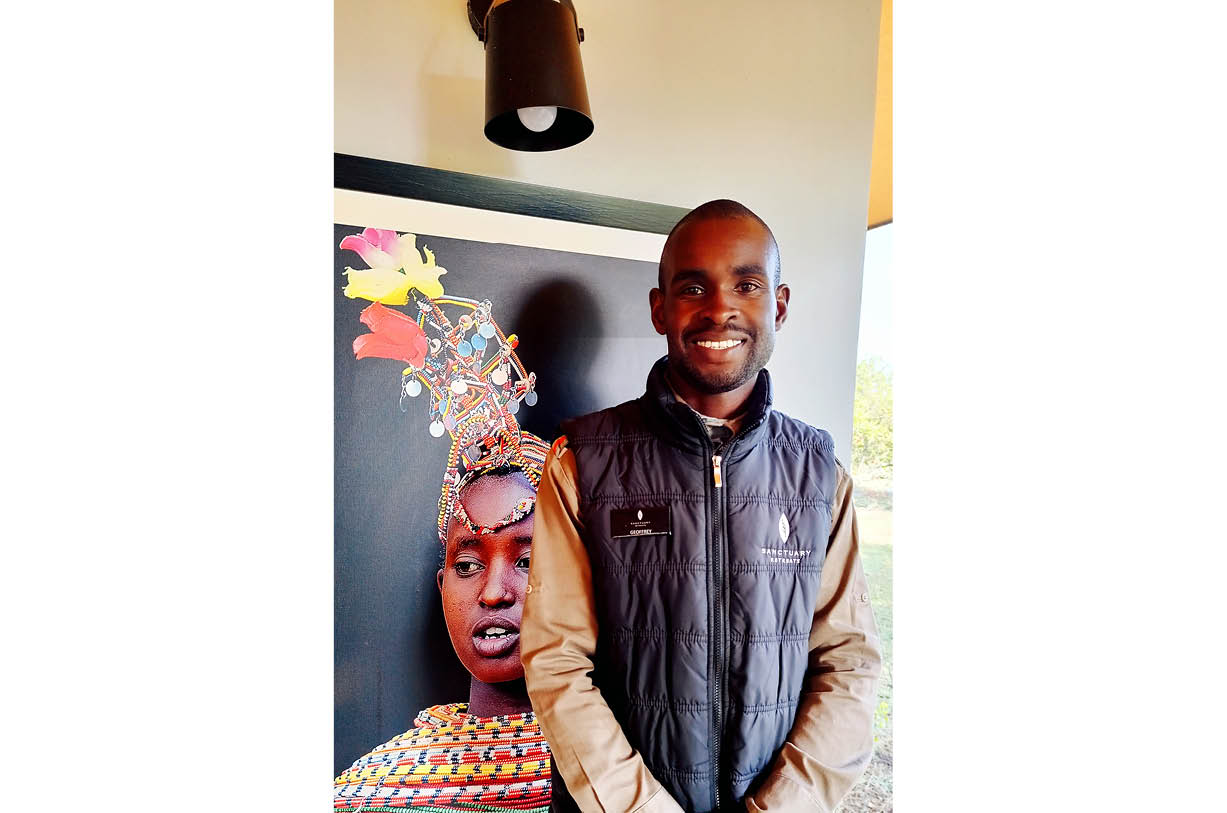 Geoffrey is from Nakuru, Kenya, he started working in the hospitality industry as a cleaner while still studying part-time at a hospitality college. During a busy December, Geoffrey was fortunate to be a casual waiter. This front-of-house experience set him on a highway in the travel industry and he never looked back. From working behind the bar thanks to a passion for coffeemaking to becoming Head of Service, Geoffrey rose the ranks very quickly before becoming our Assistant Camp Manager at Sanctuary Tambarare.

His knowledge of Kenya and the Ol Pejeta conservancy, and his leadership and understanding of the hospitality industry make him crucial to delivering the ultimate guest experience. Geoffrey loves taking the time to sit down with guests and answer all their questions on the region with a burning passion. When we asked him the highlight this camp has to offer, Geoffrey answered ‘the lion tracking’ in a heartbeat. 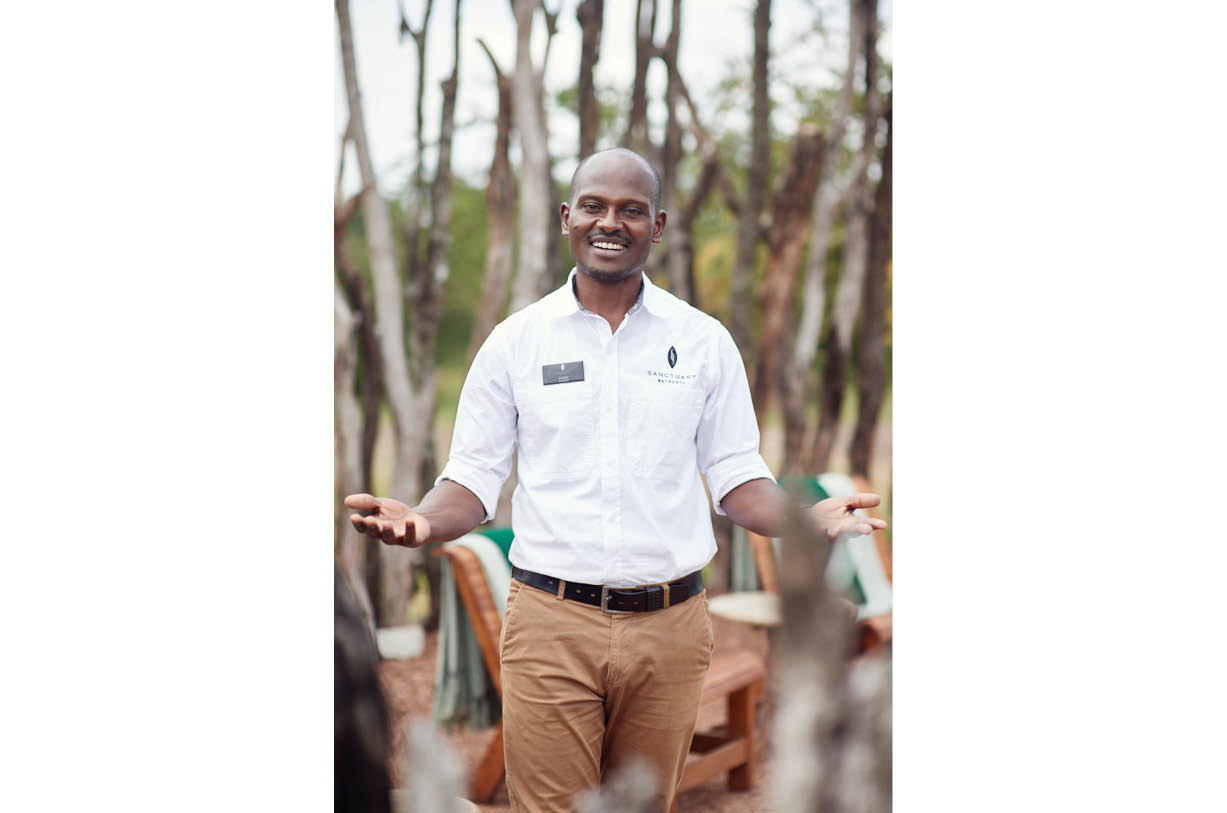 Moses grew up in Arusha in a family of five children. After completion of secondary school, he set off to work as a casual in the Bush where he grew in knowledge and experience before joining the Sanctuary team in 2004. Since then, Moses moved from camp to camp exploring the vast lands of Tanzania to help with the numerous bookings in high season. With a dedicated passion, Moses followed online Management courses that helped him all the way to Camp Manager of Sanctuary Swala in 2020 (and Sanctuary Kusini for two years before).

While Moses never ceases to be amazed by the raw beauty of Tanzania, he constantly looks forward to meeting new guests from all corners of the Earth, greeting them warmly upon their arrival at Sanctuary Swala. 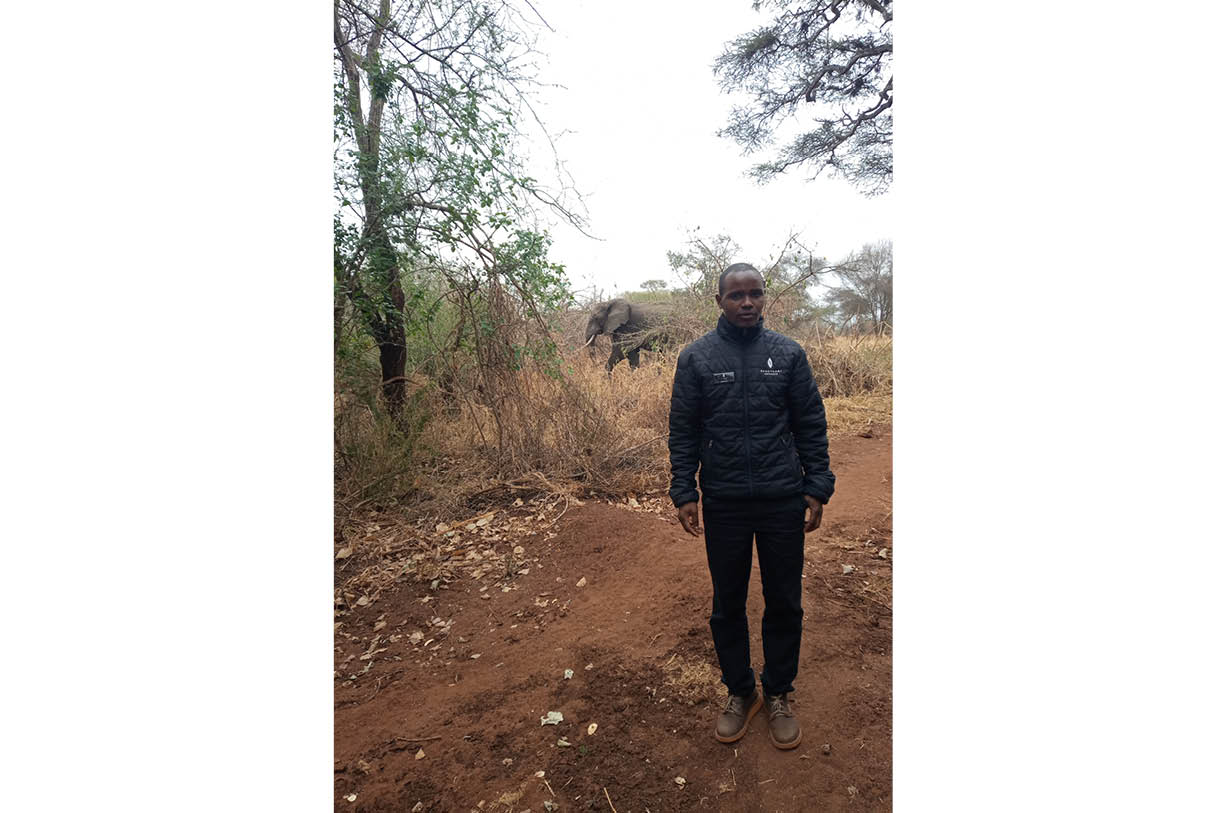 Since his first day at Sanctuary Retreats, Raphael has shown great problem-solving abilities and effortless communication with fellow staff members and guests. The lively plains that surround Sanctuary Swala keep him constantly in admiration for the region with a love for the bush that he passionately shares with guests during their stay at the camp. From answering questions about his tribe and culture to recommending some of his favourite activities to do around the camp, Raphael always looks to keep guests hungry for more! 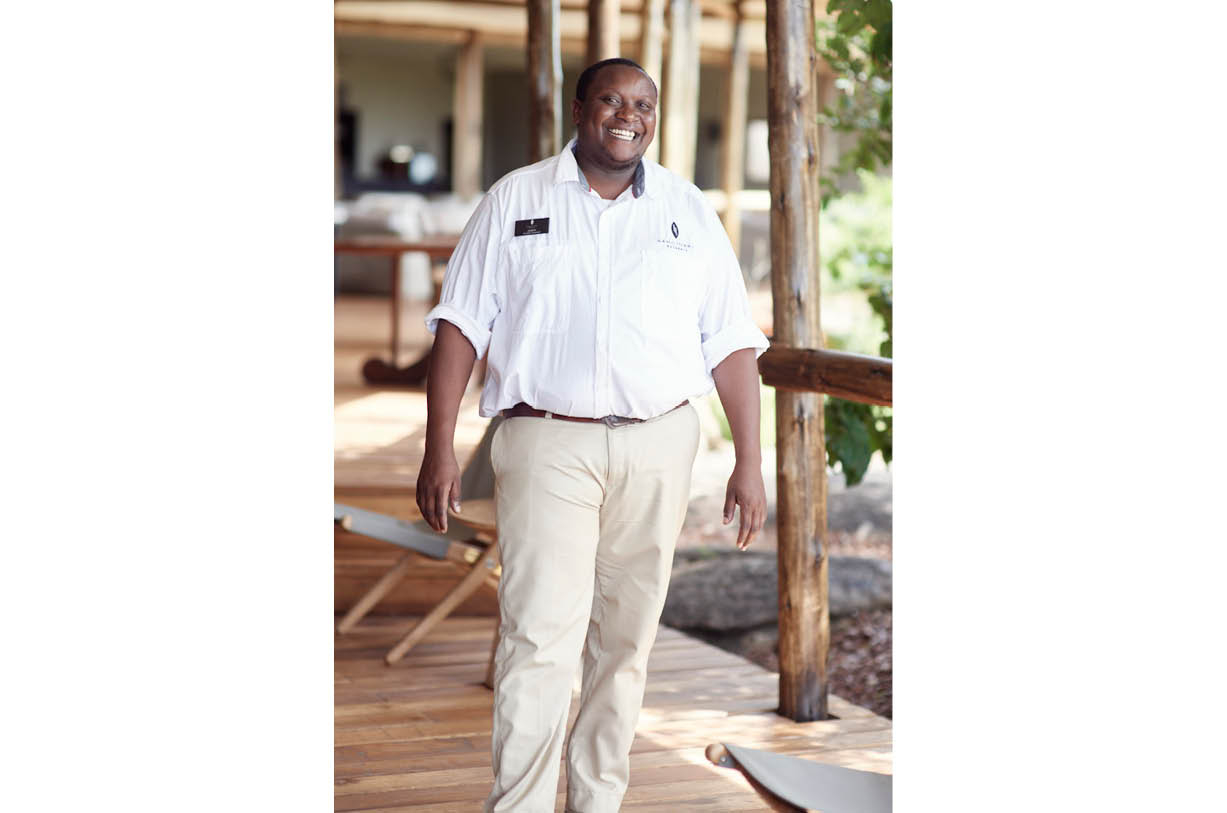 Tanzania-born, Joseph, from Kilimanjaro grew up around animals and within the tourism industry. It only felt right for him to work in the bush. After 12 years working at different Sanctuary Retreat Camps, he is now Sanctuary Ngorongoro Crater Camp’s General Manager. Joseph has come a long way since his beginnings as a waiter in Sanctuary Kusini. Striving to always be better and knowing his team and the company like the back of his hand, Joseph has proved himself to be a true leader and a great host to guests from all over the world. His love and passion for Tanzania’s national parks, regions, raw beauty, and its culture make him the perfect person to represent Sanctuary Ngorongoro Crater Camp. 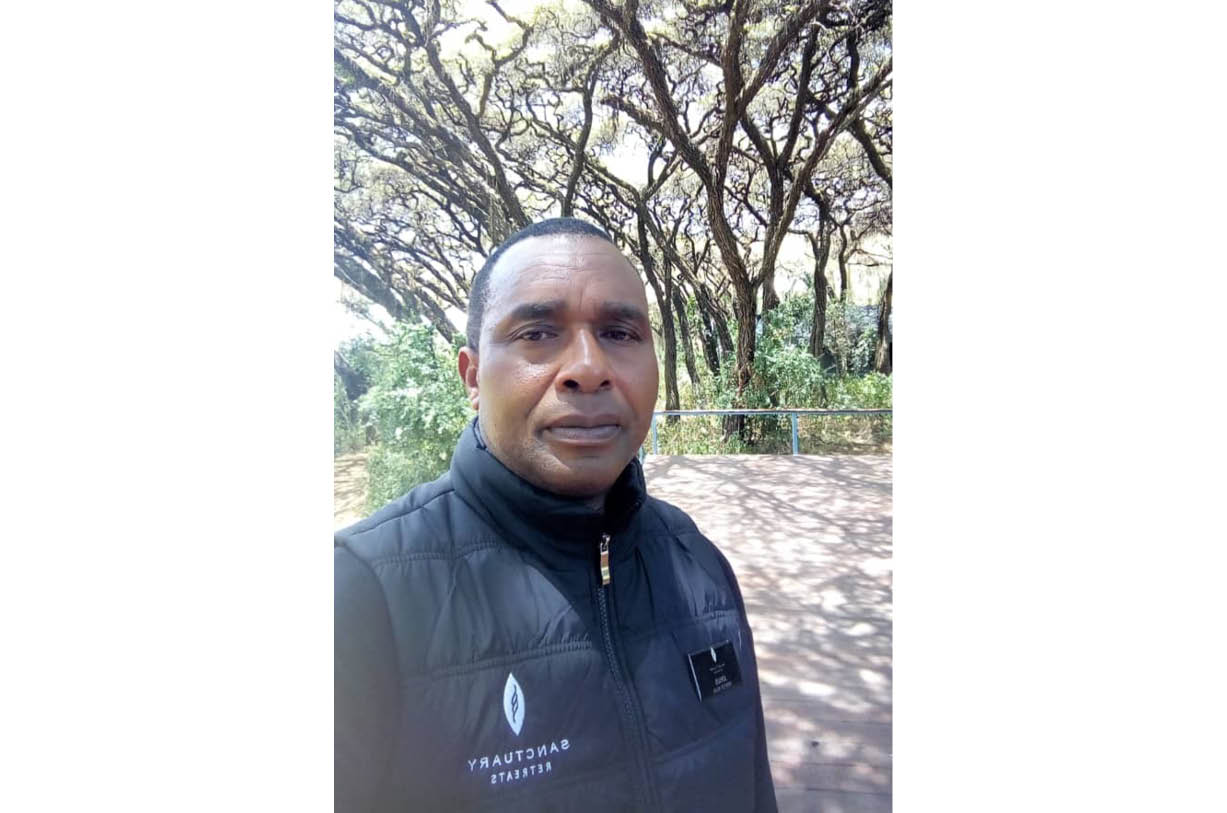 Joylus is Tanzanian-born and has been in service with Sanctuary Retreats for over 10 years. Starting off as a waiter, it took no time at all for Management to see his potential. Today, he assists Joseph in managing our Sanctuary Ngorongoro Crater Camp. Joylus’ travels across Tanzania have allowed him to see the country’s natural beauty which he is proud to see implemented in Sanctuary Ngorongoro Crater Camp. With beautiful Umbrella Acacia Trees and close access to the Crater, Joylus urges travellers in the region to stay at Crater camp to fully appreciate what the region has to offer. Upon arrival, he promises a warm welcome, eucalyptus scented towels, and a welcome drink to let you know you are in good hands. 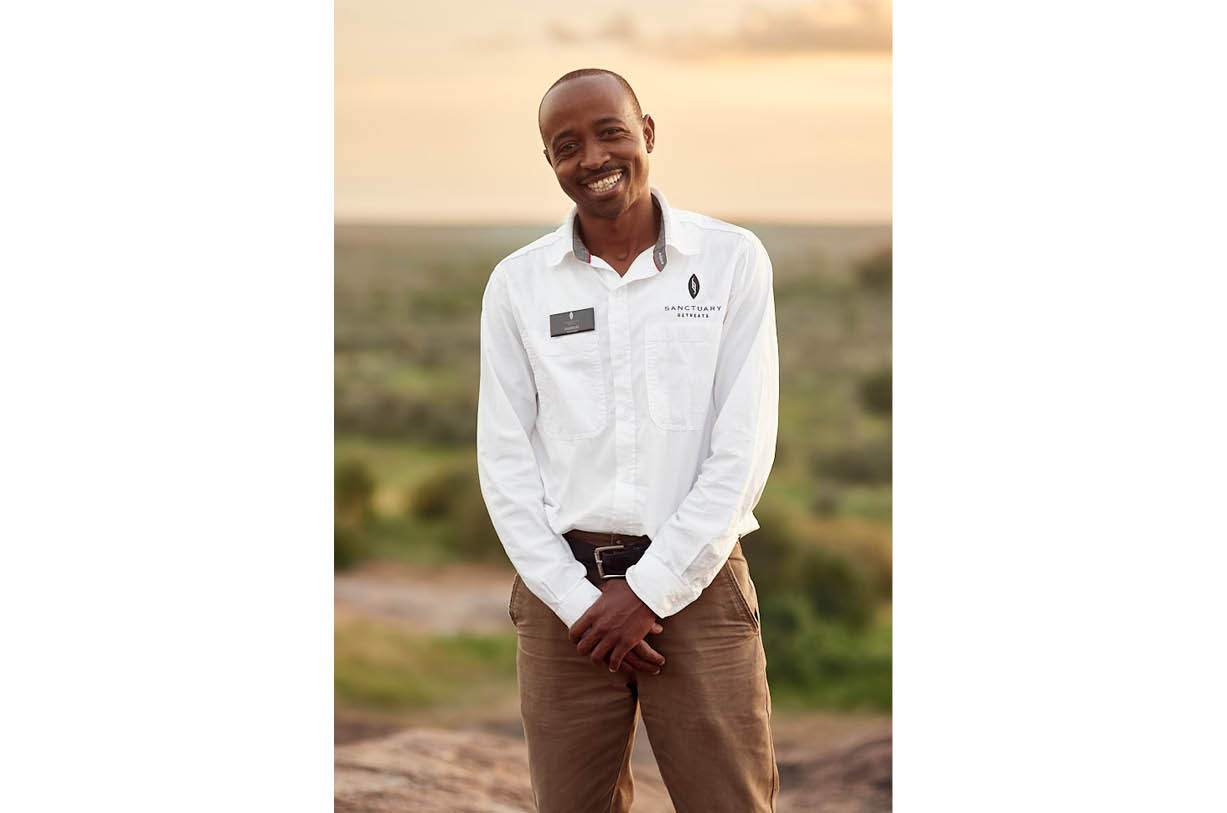 Meet Emmanuel Joseph Pareso, General Manager of Kichakani Camp, proud husband, and father of two. Born in Arusha, he grew up in the capital in the northern part of Tanzania. His loyal service of over 10 years has given him the skillset to lead our migrating tented camp in the Serengeti – Sanctuary Kichakani. Emmanuel began his journey with us by working at Sanctuary Swala Camp before being appointed as General Manager of Kichakani which he quickly fell in love with due to its migrating nature. In his words 'we are always in the perfect location to experience the Great Wildlife Migration'. 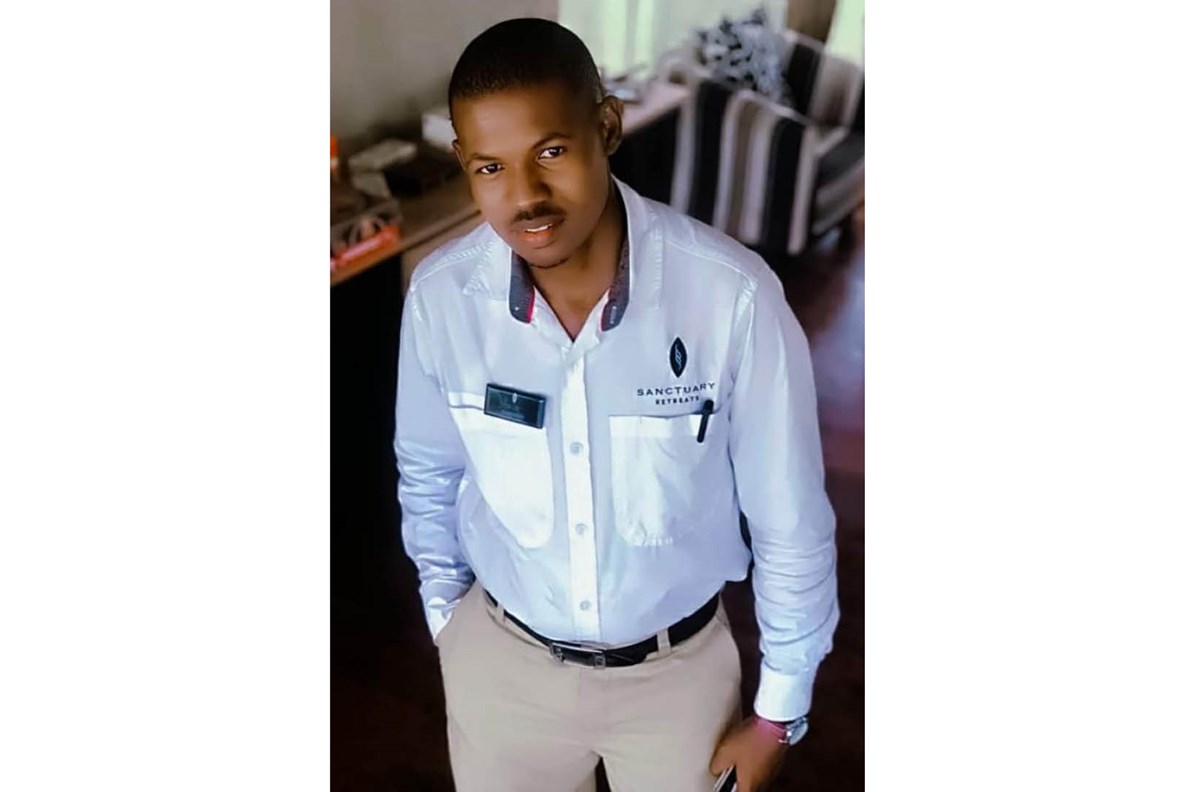 Meet Assistant Camp Manager Elirehema, aka 'Eli'. Born and raised in Arusha, he is a confident, supportive and motivated manager. After 5 years of devotion to growing Sanctuary Retreats' reputation, he finally got promoted to the role of Assistant Camp Manager at Kichakani. Since his start here, Eli still looks at the famous crossing in Northern Serengeti with stars in his eyes. Marvelled by such a breathtaking moment, he recommends it to anyone hoping to travel to Sanctuary Kichakani from June to November. For guests travelling to the Southern Serengeti from December to March, Eli will talk with burning passion about the beautiful calving season for Wildebeest as they gather in big crowds across the plains to Tanzania. 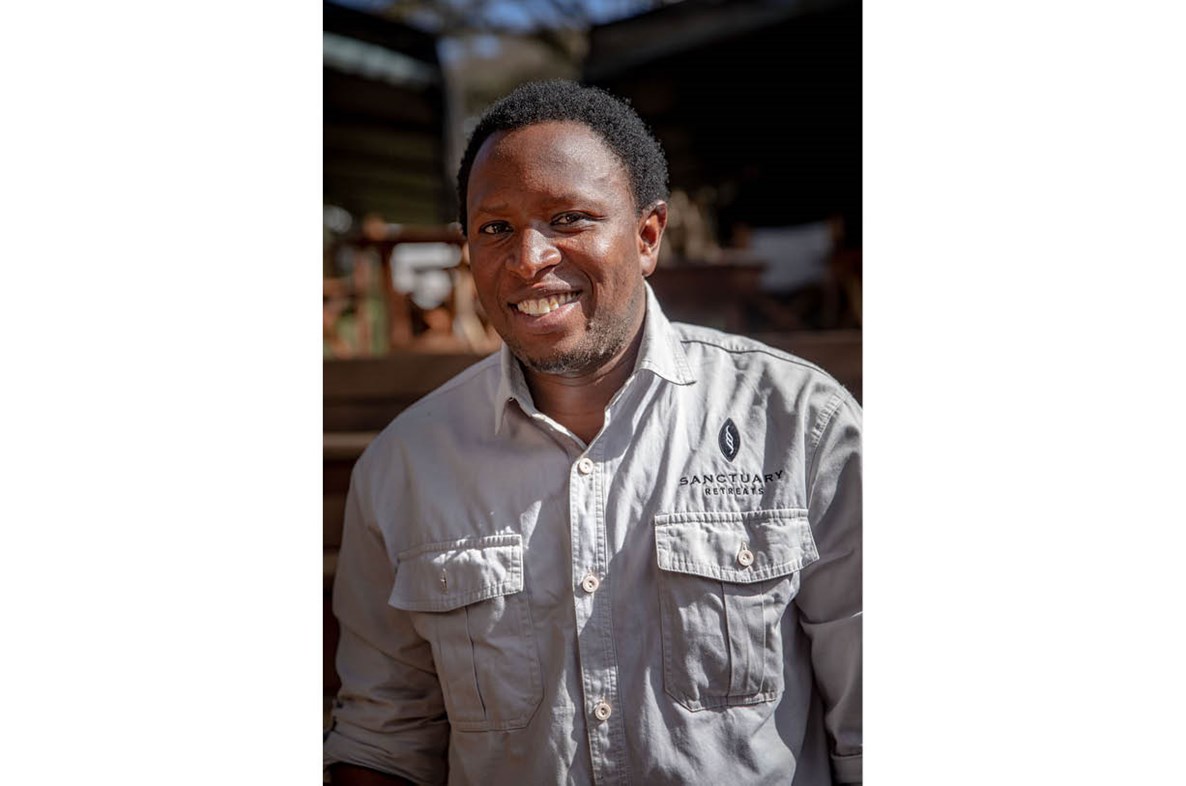 In the Mwanza region in Northern Tanzania, Peter grew up and studied Tourism and Hotel Management. Following this, he continued a career in tourism and hospitality leading him to us. We have had the pleasure to have Peter as part of our team for more than 10 years now. During this time, Peter worked at three different camps where he held managerial roles at two of them: Sanctuary Kichakani, and Ngorongoro Crater Camp before that. With his wealth of knowledge on the region and cross experience from operating different camps, Peter is the ideal person to assist you and make sure your stay at Kichakani is as fulfilling as it can be. 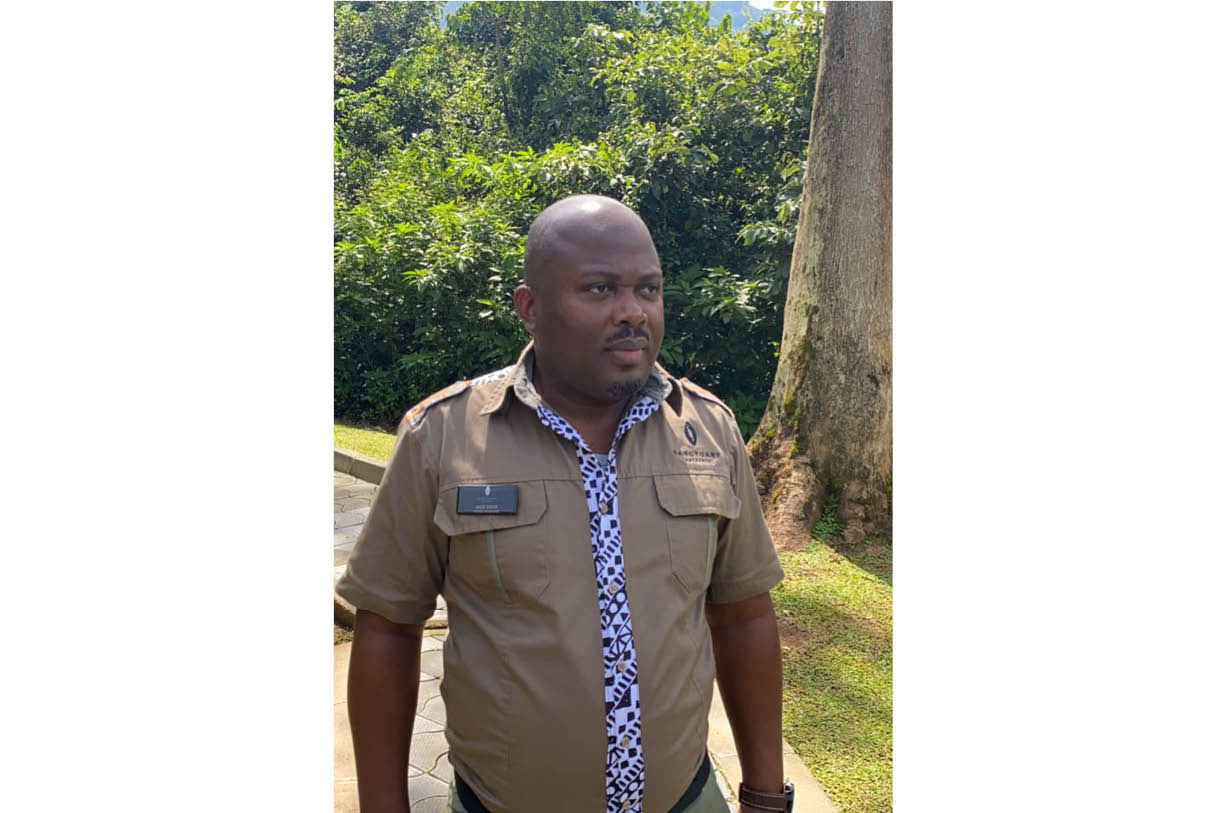 Happily married and father of 4, Nick was born and raised in the central part of Uganda. His unwarranted passion for the hospitality industry, wildlife, and conservation has played a huge role in his life today. Since his very beginnings at Sanctuary Retreats, Nick has enjoyed meeting people from all walks of life and every corner on earth. According to Nick, there is no other place like Sanctuary Gorilla Forest Camp. Located on the steep sides of the Bwindi Impenetrable Forest, he enjoys heading out to track the gorillas, but to him, there is no better feeling than seeing the gorillas walk through the camp when you least expect it. 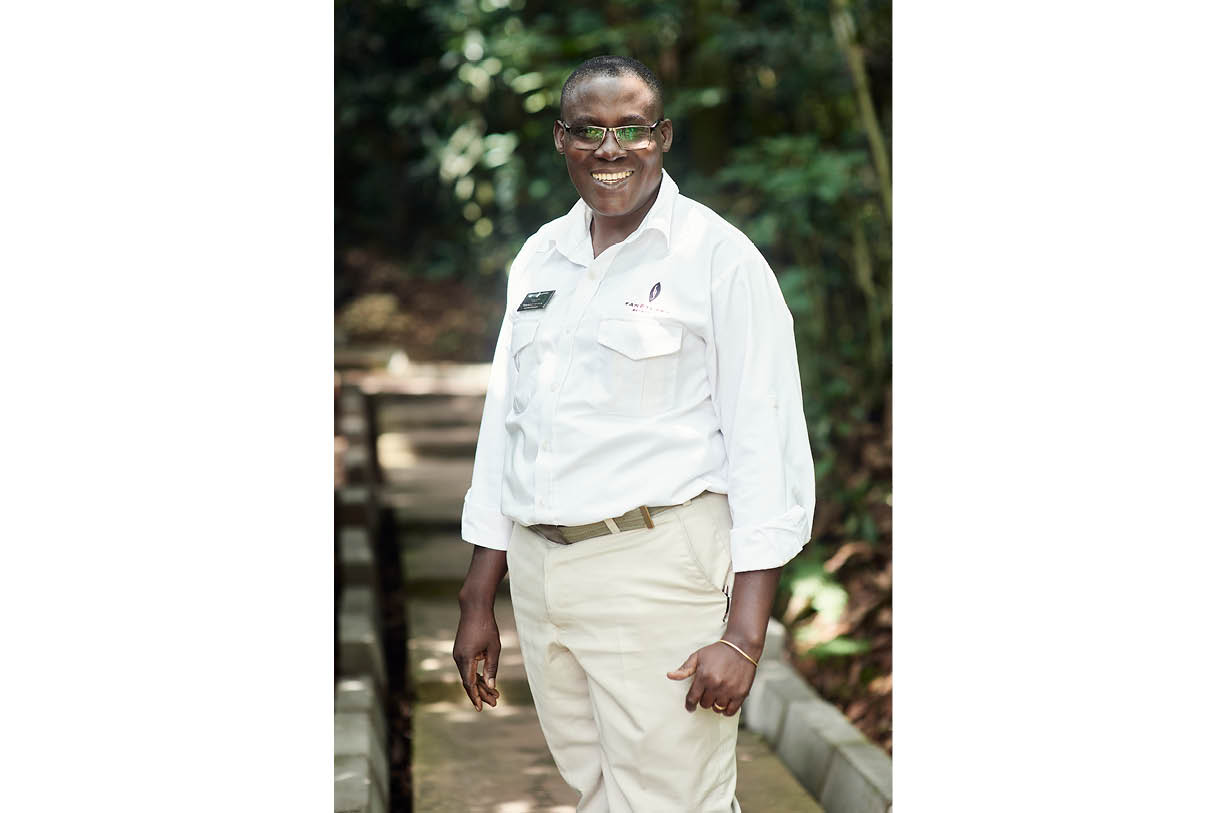 Makarius is Ugandan-born and bred and is a long-serving member of the Sanctuary family. Since he joined us in April 2016, Makarius has been critical to bringing Gorilla Forest Camp to the high standards it holds today as well as a sublime reputation. Indeed, thanks to his experience and passion, Sanctuary Gorilla Forest Camp has won World Travel Awards for six years running, an achievement he is very proud of and holds close to his heart. Makarius' favourite feature of the camp is how much it gives back to its surroundings, from its eco-friendly and conservation practices to its philanthropy programmes helping the local community with health, education, and skill development projects. Whether you are curious about the gorillas hidden in the Bwindi Impenetrable Forest or want to learn more about the local Batwa community, Makarius will happily answer you with an infectious passion for his homeland. 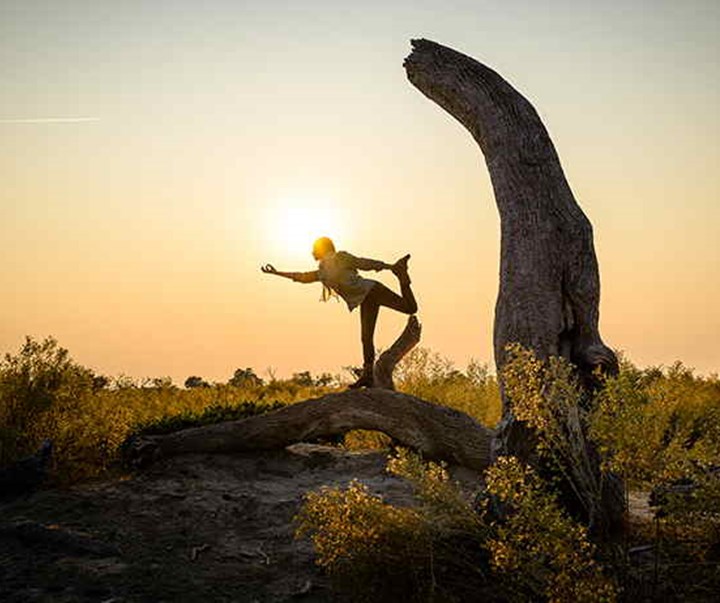